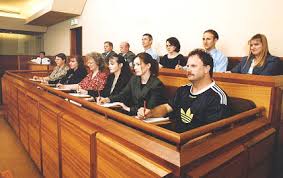 It was rather amazing for me to hear that the jury can take all the time it needs to come to its conclusion. This picture is not too dissimilar to the setting in Court 5 in Wood Green Court. On Monday, HHJ J Patrick will do his summing up, before the jury retires. Jackie Holden who published Blazon on behalf of the Musas found out that he is also an ordained priest. This raises a lot of concerns among those who have studied the connections between Freemasonry, the Church and paedophilia…

In any case, during this waiting time, the legal team and the supporters need to be in court! Otherwise, they’d never find out how the jury decides! I wonder whether there is an internet cafe nearby where one can wait?

The other amazing fact is: if 8 members decide the Musas are guilty of ‘child cruelty’ and 2 not, the verdict would not be accepted. In other words, the decision has to be virtually unanimous.

Let’s keep praying! For even if they are acquitted and freed from prison, they will still have to go through family proceedings to get their children back!